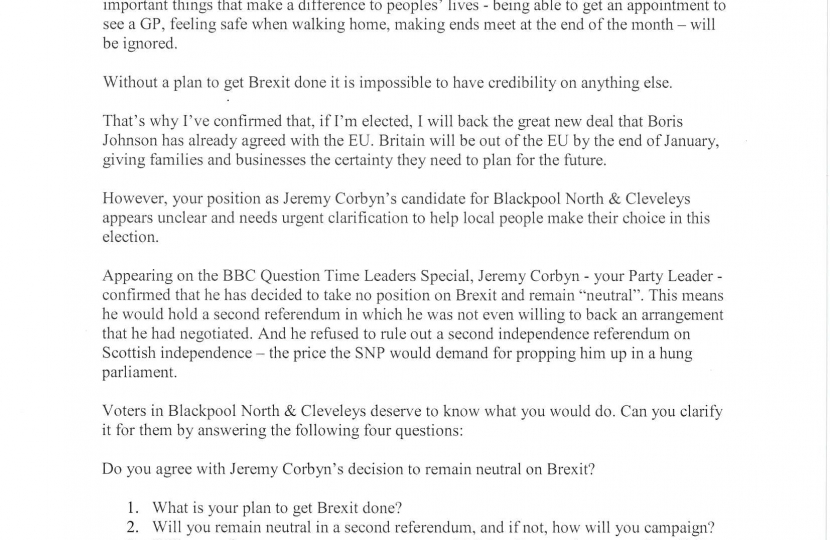 Blackpool North and Cleveleys Conservative candidate Paul Maynard has challenged his Labour opponent to come clean and let the public know how he would vote on Brexit.

Mr Maynard voted to leave in the 2016 referendum and has supported delivering Brexit at every turn. With Labour promising a second referendum, he believes it is important local people know where they stand before casting their vote on December 12.

Mr Maynard said: “I know the vast majority of people in Blackpool North and Cleveleys voted to leave the European Union. It is vital we respect the democratic outcome of the 2016 referendum. I’ve voted at every stage to ensure we leave the EU.

“I’m frustrated the Labour Party and remainers in Parliament have stood in the way of getting Brexit done. Now we need a Conservative majority in Parliament to ensure we deliver on the promise that was made to the British people.

“Labour only wants more dither and delay and a second referendum which puts Brexit at risk. Neither Jeremy Corbyn or our local Labour candidate has said how they would vote.

“I know they don’t want to talk about Brexit but the people of Blackpool North and Cleveleys need to make an informed choice which is why I’m calling on my Labour opponent to come clean and let local people know his views on this most important issue.”