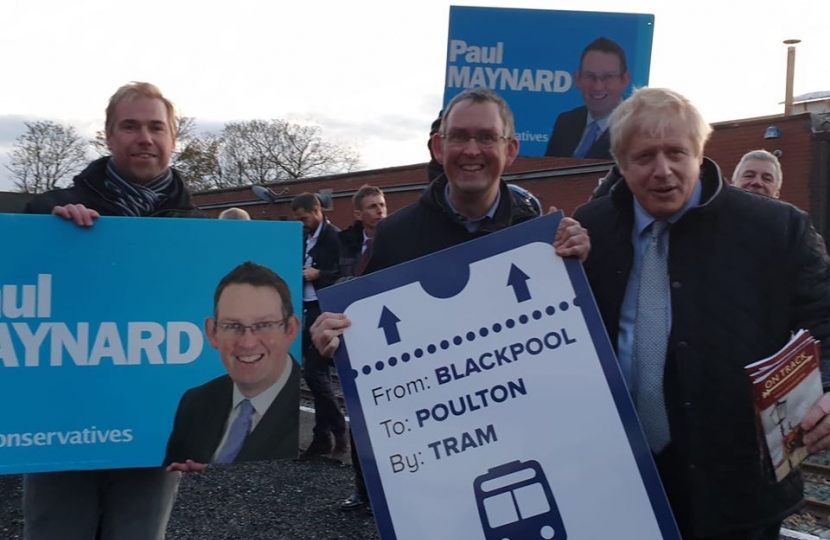 Paul Maynard welcomed Boris Johnson to Thornton as it was announced the rail link between Poulton and Fleetwood will be restored by a Conservative government.

Paul has long campaigned for the restoration of the link, favouring a conversion to light rail as an extension of the Blackpool tramway. That's just one of the options which will be considered as part of the £500m pledge.

The announced an ambitious package, backed up by hundreds of millions of pounds of investment, to support towns and communities across the North West.

The measures announced today will build on the Government’s Towns Fund and will help local towns like Blackpool – towns that have not always benefited from economic growth in the same way as towns elsewhere in the UK.

The package includes measures to:

Boris Johnson, Prime Minister, said:“When I became Prime Minister, I was proud to give my first speech here in the North West and outline my vision for this superb region. We are committed to levelling up across Britain. This region’s vote to leave the European was a vote for change, an instruction that we will deliver on.

“We are going to invest in communities across the North West and help people put the heart back into the fantastic towns and villages you call home. We are going to get Brexit done so that we can unleash the potential of the North West. We will rejuvenate the high streets, save community assets and improve connectivity by restoring the Fleetwood and Skelmersdale lines

“But we can only do this if we end the dither, delay and paralysis in Westminster. We need a Conservative majority government which will deliver for communities across Britain – not a Corbyn-Sturgeon alliance which would expend all its energy on two more chaotic referendums.”

Paul said: "It was great to welcome Boris to Thornton and to see the warm welcome he received. It is vital we bring this rail link back into use, preferably as a modern, clean, green, high frequency tramway, boosting local connectivity and restoring links to the national rail network."

A new generation of homeowners will be able to take their first step on to the housing ladder thanks to a new government scheme which will cut the cost of some new homes by a third.